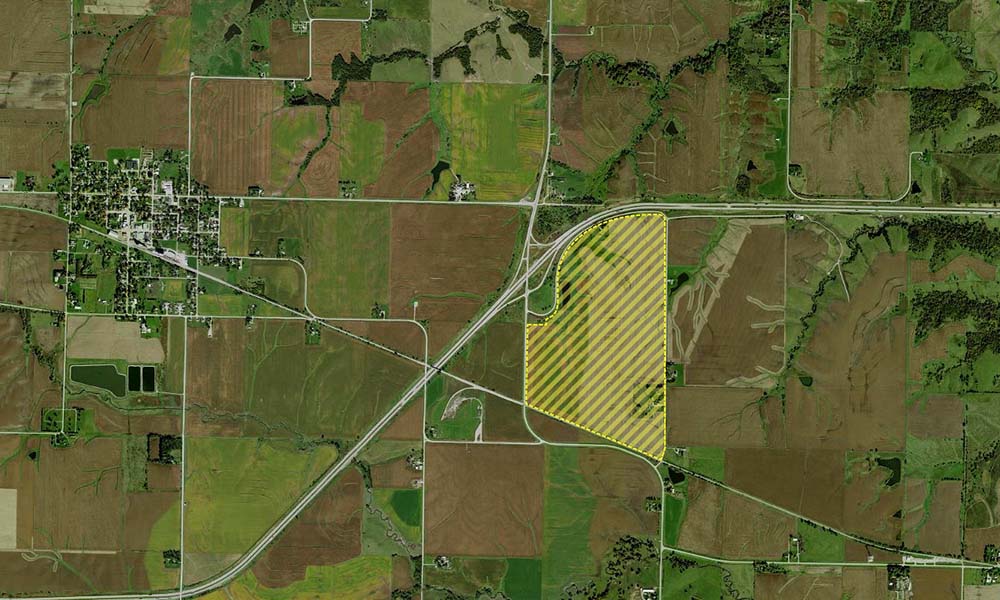 The West Metro Rail Park is comprised of a total of 255 developable acres certified for business development. This planned industrial park has direct access to Class 2 rail, as well as direct access to Interstate 80, making it a perfect location for distribution and/or warehousing,

As a certified site, the West Metro Rail Park completed all surveys and mitigated any risks. These surveys include, but are not limited to, Phase 1 Environmental, Renewable Energy Viability, Geothermal Capability, Cultural and Endangered Species Assessment and Wetlands Delineation. Road, utility and all other infrastructure plans are in place.

There are additional acres both to the east and west of the site available for purchase. Though not certified, these additional acres will allow for a nearly 800-acre footprint for projects looking for larger sites.

Dexter was founded in 1868 and quickly found itself growing into a sprawling town. Located at the edge of Dallas county, Dexter was a stopping point on a main route to Council Bluffs and points west and became the door way to the rest of Dallas County. Filled with businesses ranging from the manufacturing of washing machines to shoes and every industry in between, Dexter became a magnet for history.

Imagine one of the largest amusement parks in Iowa (circa 1916) with a huge swimming pool, dancing, skating, music, carnival rides including a Ferris wheel, ball games and camping. As many as 4,000 attended opening day each year in June. Marker Stones depicting the stories of that time in history are available for public viewing. These stones commemorate the once popular "Beautiful Dexfield Park." Hundreds and hundreds of people would gather on Sunday's to take advantage of the entertainment opportunities offered, and two individuals, in particular, made the place even more famous.

On July 24, 1933, The Barrow Gang, most notably Bonnie Parker and Clyde Barrow, were resting and recuperating from a prior gun battle in Missouri in the now abandoned “Dexfield Park.” When bloody bandages were noticed by local citizens, approximately 50 lawmen and one hundred spectators surrounded the makeshift camp. After exchanging gun fire with the officers, Bonnie and Clyde escaped on foot while Buck Barrow was shot and died soon after. The notorious couple continued their crime spree for another year before their last stand in Louisiana.

If unique architecture is of interest, stop at the Roundhouse located near the center of town, about one block west of Marshall Street on Dallas Street. Constructed in the early 1900's, it stills stands today as a testament to the quality of workmanship present in the early days. This unique elliptical-shaped building is listed on the National Register of Historical Places. The architect was Matthew Leander King, grandfather of actor Nick Nolte. The building features the original stage, box office and orchestra pit with accommodations for seating large groups for performances or for sit down dining and dances.

Return to All Certified Sites