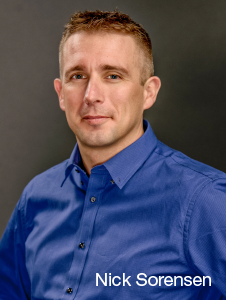 Nick was taught as a kid that if you learn to work with your hands – you would always have a job. When he was young, he was an apprentice for his father who was a mason for several years. His grandfather also served as a mentor for Nick. Once retired, his grandfather decided he didn’t like it, so he started doing handyperson jobs that no one else had time (or wanted) to tackle. As he got busier, he reached out to Nick and his friends for help. As a result, Nick learned to roof, paint, work on small construction projects, etc. It is no surprise, that Nick ended up loving to work on old single-family homes and downtown buildings.

He began his professional career as a Peace Officer and worked his way towards Sergeant over his 13-year career, 11 of which were with the City of Jefferson. During this period, when he was not working, he still found time to work on projects and with his hands. Following his career in law enforcement, Nick served as Jefferson’s Building Inspector/Code Enforcement/Zoning Official/Special Projects Coordinator. In this role, Nick found himself often working with the local Main Street organization and local economic development officials. In September of 2020, Nick left Jefferson to work for the Ames Chamber of Commerce as the director of Community and Economic Development Outreach where he provided support 12 rural communities in Story County.

In August of 2021, Nick was hired by IEDA’s Iowa Downtown Resource Center as a Downtown Real Estate Specialist. As a former building inspector and someone who knows his way around a construction project, Nick’s expertise will add another layer of support to IEDA staff managing the Main Street Iowa Challenge and Community Catalyst grants. Nick’s primary role will be to manage the newly created Downtown Housing Grant, which provides $20 million in financial assistance for projects supporting local downtown revitalization through new and renovated housing opportunities in communities under 30,000.

When not working, you can find Nick, his wife Anna and son Benton outside enjoying Iowa’s communities, counties and state parks.

Have questions about the Downtown Housing Grant or his role on the team? Contact Nick Sorensen at nick.sorensen@iowaeda.com or 515.829.2436.