Brian grew up in Brooklyn, attended Cornell College where he majored in Economics and Communications. He worked for Altorfer Caterpillar in Cedar Rapids and in 2005 joined his family business, Manatts Inc. located in Brooklyn, Iowa, where he serves as president. Laura grew up in Urbandale, attended Iowa State University and majored in marketing. She was also employed by Altorfer Caterpillar where she met Brian. After joining him in Brooklyn in 2005, Laura worked as the marketing director for the Iowa Speedway and later as the economic development director for Poweshiek County. Brian and Laura have three daughters, Clair (13), Payton (11) and Lucy (8).

The Manatts love Brooklyn where the schools are exceptional, the downtown is well maintained and inviting, and the residents are welcoming. Brooklyn has great employers and volunteers in the community. As it relates to the downtown, the city had the foresight many years ago to begin its own façade program for business owners. This program has allowed business owners to keep the facades of their buildings well maintained.

Brooklyn, like all rural communities, had a decision to make. They could watch their population dwindle and businesses begin to fold up, or they could invest in the community and make the effort to set themselves apart from others. They first invested in the schools, then the downtown, recreation (parks) and now the focus is on individual properties, like the Brooklyn Opera House and Brooklyn Bank building -- where Brian and Laura are also involved. While these are only two buildings in downtown, they are two of the more historically significant and iconic buildings in the downtown area. If the buildings were torn down or went away, the community would not be able to build something as significant.

With Laura’s background in economic development and Brian’s interest in recruiting employees to the area, they made it their passion to make Brooklyn a place where residents would enjoy living, working and raising their families.

Brooklyn is an hour from Des Moines, Iowa City, Cedar Rapids and Cedar Falls. So, the goal with the Opera House was to offer people in the community something to do in their spare time. Whether it’s attending community theater, concerts, movies or social gatherings, it was important for the community to have a place they were proud of and a place that did not require them to travel an hour away. They want a place for kids in the community to have activities to look forward to and to make memories at the Opera House like those experienced by their parents and grandparents. The hope for the city of Brooklyn is to be a community in which kids are proud to have grown up in and a place they would return to as adults with their children. The community is now experiencing many attending the Opera House from outside the Poweshiek County area to enjoy a unique opportunity. 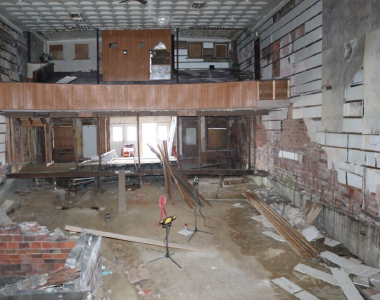 Brian and Laura began exploring the Brooklyn Opera House project in 2014. The building had fallen into disrepair, and the façade was beginning to fall off on to the sidewalk. Although, many efforts had been made over the years, the couple made one last attempt to see if the building could be saved. They decided to spearhead the project.

From 2014-2018, they established a non-profit and began the tax credit process. In 2019, construction began on the Opera House and was completed in June of 2020. Laura became the general manager for both the Brooklyn Opera House and neighboring Michael J Manatt Community Center in February of 2020.

The first year of operation saw many challenges – not simply those often experienced by new venues – but also, those related to the COVID Pandemic. During the COVID shutdown, families were allowed to reserve a time to come in and take a tour of the completed Brooklyn Opera House.

During the project, one of the most rewarding factors for the Manatts was their role in bringing families back into the venue where so many memories were made from their childhood. Several residents were overcome with emotion during their first time visiting in over 20 years!  Many peopled laughed as they told stories of their memories growing up in the Opera House. Several communicated they were anxious to get back on stage or in the projector room as well!

In 2021, the Opera House is excited to host a full line-up of events and finally hosted the Grand Opening in October.

2014 – The Manatts met with Neumann Brothers in Des Moines to see if the Brooklyn Opera House could be salvaged and determine what they would estimate on a renovation cost. They hosted community visioning sessions to determine if the building was restored, would people use it and how they will use it. 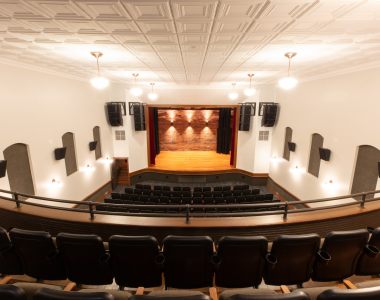 2015-2016 – The Manatts took approximately 18 months to think about the project and to make sure this was something their young family really wanted to take on as it would be both a huge financial and time commitment.

2017 – They established a non-profit, Brooklyn Community Development, which consisted of five board members. The initial board needed to be small and nimble to make construction decisions quickly and not hold up progress. They hired Architectural Historian, Jennifer James, to assist with the State and Federal Historic Tax credit process. They also began applying for grants to help with the project. The first two grants awarded to the project were the DNR Derelict Building Grant and the Community Catalyst Building Remediation Grant available through the Iowa Economic Development Authority’s (IEDA) Iowa Downtown Resource Center.

2018 – The group finalized the construction plan and costs. The Opera House was attached to the neighboring community center. The alleyway was enclosed and would serve as the main entrance and provide ADA accessibility for the Opera House.

2020 – Occupancy permit was received, and the venue could be open to the public.

The Community Catalyst Building Remediation Grants received (the Opera House and the Bank) have been exactly that – CATALYSTS. Both grants provided a catalyst for encouraging others to contribute to the projects and created a catalyst in their downtown.

At the time of the application for the Catalyst grant (Opera House), downtown looked good – but there were still 4-5 open storefronts. To date, the only open storefront in downtown is the bank building that sits right next to the Community Center and Opera House, which will begin renovation soon. You guessed it, Downtown Difference Makers, Brian and Laura Manatt will spearhead this project too!

Downtown Brooklyn has a new coffee shop, pharmacy, hardware store owner, insurance office and flower shop. The infrastructure was in place because of the enhancements the city made 10 years ago. There are a lot of cars in downtown on any given day.

Their hope for the future of downtown is to continue to make enhancements in the downtown and support the businesses currently located there. The chamber of commerce has made great strides in promoting business in downtown Brooklyn. The Manatts also hope the City of Brooklyn and its business owners continue to be proactive in taking care of the downtown buildings.

Brian and Laura could probably write an entire article on all the lessons they have learned, but for now they communicated these: