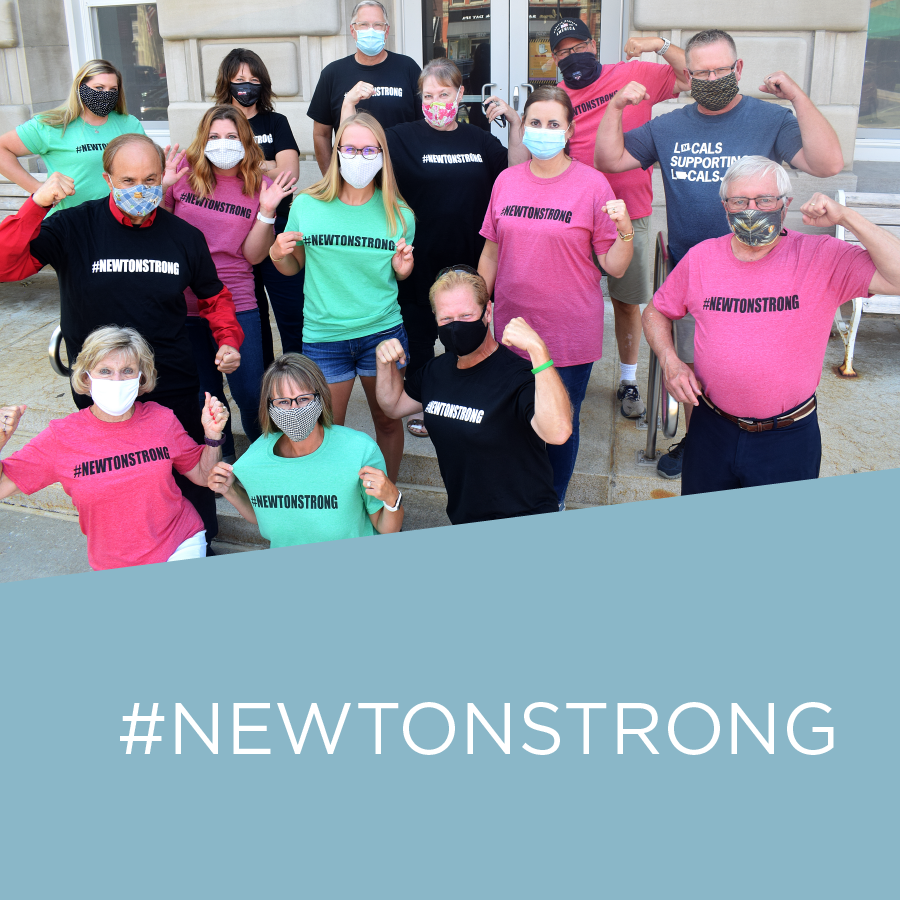 As the old saying goes, “When the going gets tough, the tough get going!” There may be no better example of that adage than the staff and volunteers at Newton Main Street, who faced down numerous challenges in 2020 and found ways to survive and thrive with creativity, collaboration and chutzpah.

Those challenges weren’t even on the radar screen of the citizens in Newton, Iowa, on New Year’s Day 2020. A city of 15,200+ residents and a growing number of small businesses, Newton had experienced a robust retail holiday season and were anticipating both economic vitality and population growth with the dawning of a new decade.

March of 2020 was a stunning and disorienting end to those expectations, as a global pandemic wreaked havoc on Newtonians lifestyles and sense of normalcy. Small businesses – particularly downtown retailers and restaurants – were forced to close and their mere survival threatened. Undeterred, Newton Main Street jumped in right away, working directly with affected businesses to access local, state and federal assistance programs at a time when the need was simply overwhelming.  Many local entrepreneurs credit that timely help with literally saving their businesses.

But what about the sources of funding for Newton Main Street, with events cancelled and nervous business owners in critical survival mode? The need for program funding couldn’t be placed on hold while waiting for the economy to regain footing, so Executive Director Erin Yeager and her loyal group of local volunteers got busy imagining a new way to raise funds while saluting the grit and determination of Newton’s business community. The result was the creation of the #NEWTONSTRONG campaign, with t-shirts and decals priced at $15 and $5 respectively.

Turns out, Newtonians were crazy about these boldly emblazoned items and the initial runs sold out quickly, with requests for more coming in daily to the Main Street office on Newton's courthouse square. Hey, if you can't hold the wildly popular farm-to-table dinner or trivia night fundraisers due to COVID-19, you can certainly capitalize on your community's pride in their ability to survive, despite the adversities. It was a calculated bet, but it paid off handsomely for Newton Main Street.

And, speaking of adversities, how about an inland hurricane (aka, “derecho”) that devastates a good portion of your community, knocking out electricity to virtually everyone in the hottest month of the year? August 10, 2020, is a day that Iowans will likely never forget, still struggling with the pandemic, Newtonians reached out to their neighbors, friends and families to lend a helping hand in a crisis. While it was heartbreaking to see the widespread destruction Mother Nature wrought, it was also incredibly heartwarming to witness the many acts of kindness that followed.

Once again, the folks at Newton Main Street jumped into action and this time created #NEWTONSTRONG, Version 2, a hot new design that featured the slogan on the front of the t-shirt and #COVID-19 and #Derecho2020 adorning the back. As Director Yeager likes to say, “We ARE Newton Strong . . . and we WILL bounce back!” And no one in Newton is betting they won’t . . .