The Iowa Reinvestment District Program is designed to assist communities in developing transformative projects that improve the quality of life, create and enhance unique opportunities and substantially benefit the community, region and state. An eligible project within the Iowa Reinvestment District is a vertical improvement constructed or substantially improved within a district.

Take a look at how Reinvestment District funds have been used in previous grant cycles and how communities have built transformational projects. 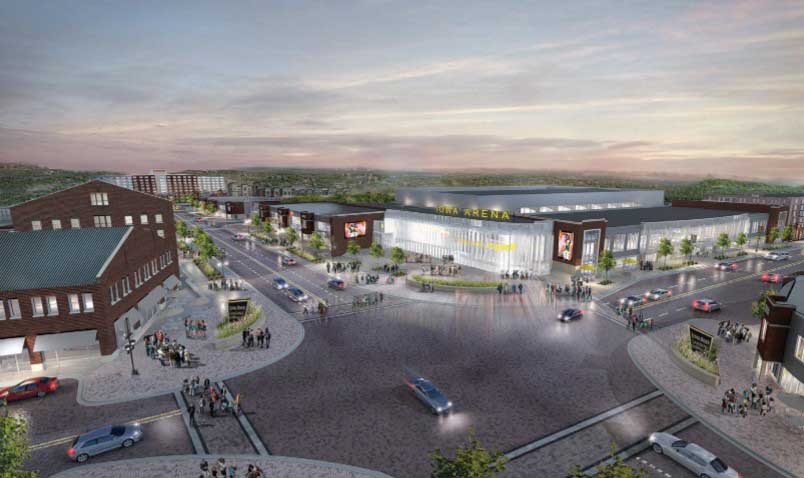 The $12 million reinvestment project award brought new opportunity to the Iowa River Landing District, including mixed-use office and residential space, additional hotel capacity and a new transportation facility that would connect Iowa River Landing to downtown Iowa City and the University of Iowa.

Serving as a district anchor, the 6,216 seat multi-use arena and fitness/sports performance center would be a catalyst for the already thriving area and would enhance its reputation as a major regional attraction and provide new experiences and opportunities for residents and visitors alike.

Located in Downtown Des Moines, the Iowa Convention and Entertainment Reinvestment District proposed to transform the area surrounding the Iowa Events Center (IEC) and connect the IEC to other bustling downtown areas.

For this district, the potential of the Iowa Reinvestment District Program is realized by the redevelopment of essential downtown sites, including the transformation of an office building into a new full-service 330-room, 235,000 square-foot convention hotel. The new hotel would feature a ballroom, meeting space, a full-service restaurant and bar, underground parking and various luxury amenities for guests to enjoy throughout the year.

Other key investments to the district included the preservation of significant architecture, enhancement of surrounding infrastructure, improving walkability throughout downtown and connecting popular surrounding destinations including the IEC, Principal Riverwalk, the Civic Center of Greater Des Moines and Cowles Commons, the East Village, Court Avenue and Western Gateway Park.

The redevelopment of this district through several key renovations proposed to increase tourism in the state, maximize the economic impact downtown and improve the quality of life in Des Moines for years to come.

The reinvestment would also develop a mixed-use area at the confluence of Grinnell's Historic Downtown and the Grinnell College Campus with a new Campus Store serving as the anchor tenant for this redevelopment.

The reinvestment plan was comprised of mixed-used development projects to reshape the historic downtown district, spark economic growth and serve as a catalyst for further downtown development and revitalization.

Update: Since the original proposal, the Grinnell District unveiled Hotel Grinnell in September 2017 and have continued to revitalize the downtown area.

The district is comprised of Mason City’s iconic Southbridge Mall, representing the city’s commitment to redevelopment, responsiveness to contemporary retail trends and the needs of the community. Plans for the downtown hotel include a four-story, 100-room hotel with guest amenities, a restaurant and flexible meeting space. Within this plan, the hotel is located south of the Southbridge Mall and would directly connect to the newly renovated Meredith Willson Museum and The Music Man Square Conference Center through the new South Delaware Avenue Skyway.

The enhancement plans for this district are uniquely Mason City with tributes to Meredith Willson and the city’s place in musical history. The addition of these developments would elevate the Southbridge Mall area and entire Mason City downtown area through increased tourism and local community participation, and would provide new opportunities for the future development of this community.

Update: Since the original proposal, the Mason City Downtown Reinvestment District debuted the Mason City Arena in December 2019 and broke ground December 2020 on the Principal Pavilion, a performing arts center which will be located at the north entrance to the Southbridge Mall. 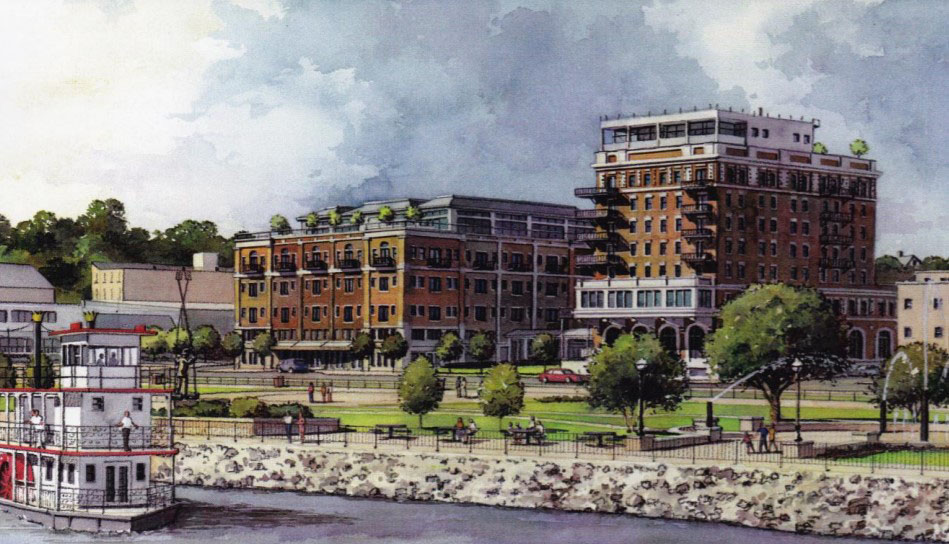 This district plan lends the opportunity to future growth of the district through newly added green space and mixed-use developments featuring residential, restaurant and retail space.

Update: Since the original proposal, The Merrill Hotel debuted in March 2018 as a Marriott International hotel and was named the best hotel in Iowa by U.S. News and World Report and TripAdvisor's Traveler’s Choice Best of the Best Award of 2020. 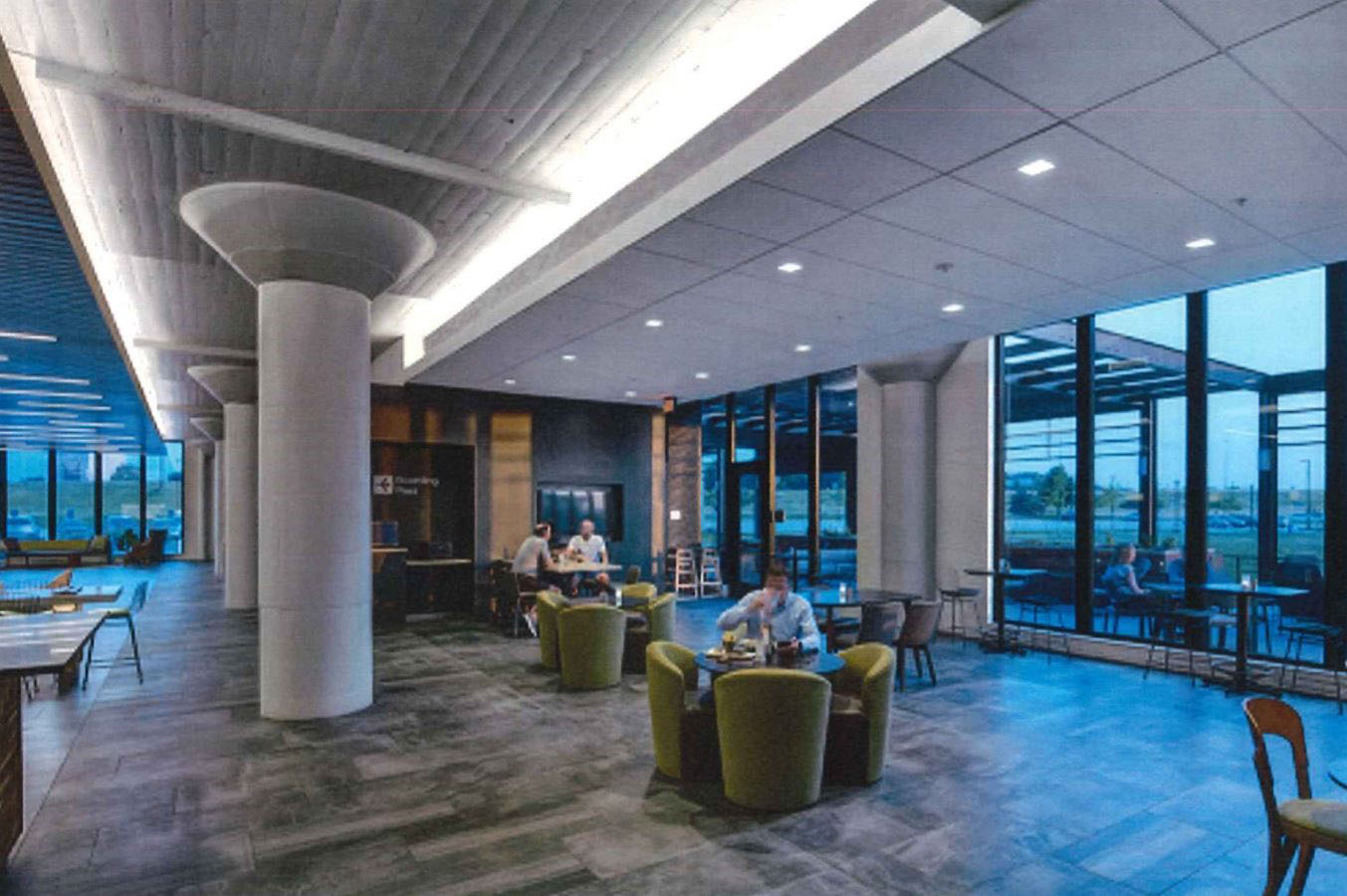 The mission of the TechWorks Campus Reinvestment District Project is to make Waterloo a center point of applied research and commercialization of advanced manufacturing, bioproducts and renewable energy technologies.