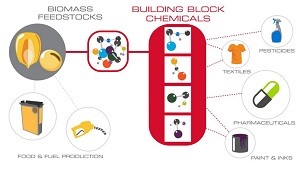 The biobased chemical industry is on an upward trajectory, according to a new U.S. Department of Agriculture (USDA) report.

Biobased chemicals are those derived from plants and other renewable materials rather than petroleum. The number of chemicals listed in the USDA BioPreferred program increased by more than 38 percent from 2015 to 2016, according to the report, “Indicators of the U.S. Biobased Economy.”

Brent Shanks, Ph.D., is director of the Center for Biorenewable Chemicals at Iowa State University where he leads a team of engineers researching the processes that turn raw biomass into biobased chemicals. Shanks and his colleagues push forward progressive, paradigm-shifting ideas in a remarkably short period of time.

“When we first started working on this area of research around 2001 and 2002, we’d go to our national chemical engineering conferences and almost no one was working in the area. We helped get some sessions going at those national meetings,” says Shanks. “When we went last year to the meeting, there were probably 40 sessions on these topics.”

Shanks appreciates the support he receives from Iowa, which he says has been deliberate in funding research specifically focused on biorenewables. Such a symbiotic relationship represents exactly the type of partnerships the state wants to develop. This institutional support makes Iowa an exciting place to engage in groundbreaking work.

Shanks and his team are currently working with a series of newly discovered molecules, which is full of opportunities. “We have one molecule that’s an interesting mosquito repellent that no one has ever looked at before,” says Shanks. “We have another one that’s a really interesting food preservative. To me, that’s the exciting part about biomass. If you can talk about new molecules, now you’re talking new value propositions to move our society forward.”

Iowa’s mix of bioprocessing infrastructure, available biomass and forward-thinking policy makes the state the best location in the country for the development of biobased chemicals. Iowa is home to 43 operating ethanol plants and 12 biodiesel plants. These bioprocessing facilities create crucial inputs for biobased chemical production. The state also contains the second-most acres of harvestable biomass of any state in the country. In addition, USDA has called Iowa’s Renewable Chemical Production Tax Credit Program the “strongest existing incentive package for the global biobased chemical industry.”

In recognition of Iowa’s preeminence in the industry, the Biotechnology Innovation Organization (BIO) has chosen Des Moines as the site of the 2019 BIO World Congress on Industrial Biotechnology in July of next year.

“Iowa is a natural leader in the growing biobased economy – with a large number of biobased product manufacturers, as well as renewable chemical and biofuel producers – making it a great location for the world’s largest industrial biotechnology conference,” Brent Erickson, executive vice president of BIO’s Industrial & Environmental Section, said.

Learn more on Iowa’s advantages as a location for biochemical production.